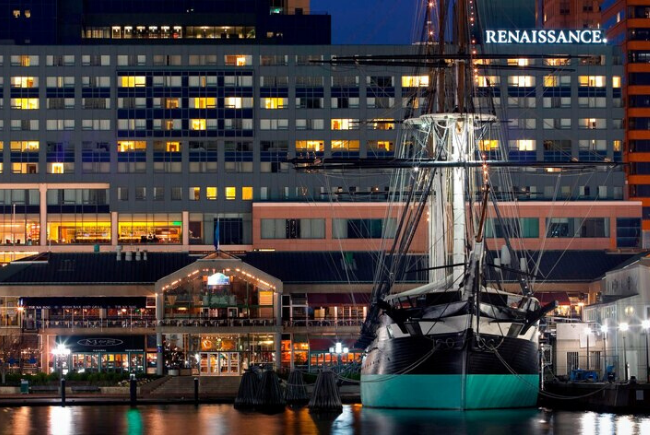 The Renaissance Baltimore Harborplace Hotel is a 622-room landmark hotel located in the heart of Baltimore’s Inner Harbor, the epicenter for tourism in the city. The Inner Harbor attracted 26.2 million visitors in 2017 (up from 25.9 million the previous year; most recent data available). The property is in walking distance of both M&T Bank Stadium (home of the NFL’s Baltimore Ravens), Camden Yards (home of the MLB’s Baltimore Orioles), the Baltimore Convention Center (the city’s largest exhibit space and foremost concert venue), the National Aquarium, the Maryland Science Center, and the largest concentration of Baltimore’s 21.6 million square foot office market, including M&T’s headquarters.

The previous owner, Sunstone, acquired the hotel in 2005 for $157 million and over the last 10 years, has invested over $37 million into the property. As part of its capital expenditures, Sunstone recently completed a $21.6 million ($34,800 per key) renovation that included a comprehensive overhaul of all guestrooms, bathrooms, and suites at the hotel. Upgrades include the replacement of soft goods and soft seating, as well as gut bathroom renovations (50 percent of inventory now features showers). Following the acquisition, the hotel will continue to be managed by Marriott.

The twelve-story Renaissance Baltimore Harborplace benefits from a “Main and Main” location at the heavily trafficked intersection of Light Street and Pratt Street, in the heart of the Inner Harbor. The hotel currently features 622 well-appointed guestrooms, approximately 28,000 SF of flexible meeting and event space with state-of-the-art finishes, and three food & beverage outlets. The hotel offers full-service amenities including a fitness center, a 24-hour business center, complimentary Wi-Fi, a concierge desk and valet parking.